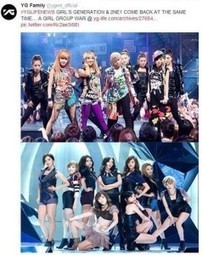 It’s been a while since we had such a matchup of industry titans going head to head.

This article features various opinions about the simultaneous comebacks of two of K-pop’s most successful and popular girl groups. Members refer to the "anti-aegyo" discourse often targeted to SNSD, as well as the continued use of the "fierce" concept for 2NE1. Described as a competition between the two girl groups, it overlooks the fact that some fans like both groups.