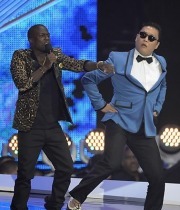 This article takes some liberties with the history of Hallyu, conflating its East Asian and global spread and contributing to the narrative that Psy’s international fame is completely unrelated to the Korean agencies that produce such idol groups as Super Junior and solo artists like Rain.

This article does not make distinctions between Hallyu’s engagement in East Asian countries like Japan, which is several years old, and its engagement with Europe, Central and South America, and the United States.

Psy strikes many who are unfamiliar with K-pop as different, but what happens at a Psy concert isn’t that much different than what happens at a Super Junior concert.  Even more amazingly, the article contends that “Though he is managed by YG Entertainment, the fact that he was managed by them did not contribute to his success.”  That is hard to believe, as Psy is a member of the label, has toured with the YG Family (other artists on the label) and features some of those artists in his video for Gangnam Style.

Psy’s experience is very different from Jang Geun Suk, who has practically taken up residence in Japan, but remains virtually unknown beyond East Asia.