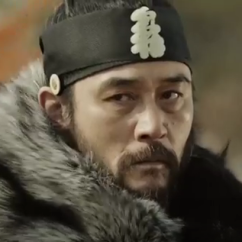 I put this K-drama down for a minute, but I had to pick it back up once I realized that it had the Triple Threat!!!! First, Choi Min Soo as King Sukjong! He is one of my favorite actors, and he apparently is the founder of the School of Chill Acting. No matter the role, he’s in permanent chill mode. In Daebak, he’s mostly just chillin’ on the throne, drinking tea, incense swirling around him, peering over his glasses (is that historically accurate?) condescendingly at his lackeys. Or chillin’ in a pavilion. Or chillin’ in his inner chamber. But don’t let his laid-back demeanor fool you…he knows EVERYTHING going down in the kingdom and he is not to be trifled with! Second is another alumni from Warrior Baek Dong Soo, Yeo Jin Goo, who plays Prince Yeoning,  who gets treated badly by the royal ministers because he’s the son of a water maid.  Baby Baek Dong Soo is all grown up. He’s just trying to get justice for the people and perfecting his placid  “I’m going to stand here and let you yell at me/I did exactly what you told me not to do” look in front of the King. I’m loving those closeups too! Third is the Prince of Asia, Jang Geun Suk as our hero, Baek Dae Gil! Goofy as ever, he’s doing a good job of playing the tragic gambler. I really need him and Yeoning to be friends.

But there’s a bonus!!!  Ahn Kil Kang as old school swordsmaster Kim Chae Gun who takes on the task of whipping our titular hero into shape. Together, they are the best reasons for watching this K-drama!