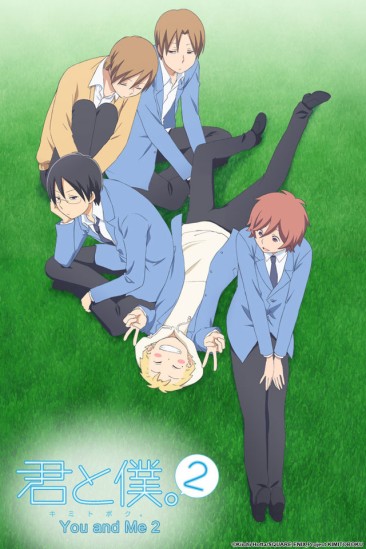 Kimi to Boku [You and Me] 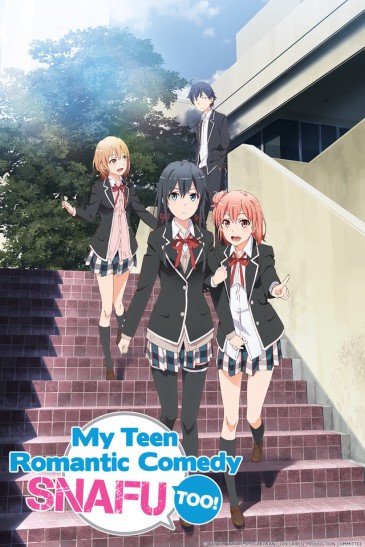 Kimi to Boku [You and Me] and My Teen Romantic Comedy SNAFU are two low-key anime series set in high school that revolve around the everyday lives of students.  Kimi to Boku follows the exploits of four male friends who have been in the same class since kindergarten, so early episodes are peppered with flashbacks to them as adorable yet strangely articulate toddlers. My Teen Romantic Comedy SNAFU centers on a service club populated by the last people who should be in a service club: three individuals who all need to work on their social skills. Both series revolve around character development rather than action. Some might say that they are slow and nothing happens.

Both series also feature siblings where one or both are stoics. TV Tropes defines the stoic as a character who “show[s] all the emotional reaction of a victim of a Botox overdose,” possesses a “quiet demeanor tends towards the brusque or outright rudeness” and often “give[s] the impression of a lot going on inside and cultivate[s] an air of mystery and to confuse other characters with cryptic one-liners.” I love stoics in anime, especially stoics that are related! They are often funny without trying to be, mostly because their demeanor rarely matches what is going on around them. It is a mistake, however, to think that stoics are not emotional; they just don’t show it very often. Familial relationships are one place where this happens.

While one could argue that Kimi to Boku is filled with angsty teenagers, my favorites have to be Asaba twins, Yuki and Yuta. It took me forever to figure out who is who (hint: it’s the bangs), and it may seem that they are the same, since both are stoics. However, they have very different personalities. All Yuki wants to do is read his manga, go to the store to peruse the next manga he’ll purchase, or re-read the manga he already owns. He’s quite motivationally challenged (i.e. lazy). In the first episode, Kaname decides that Yuki needs to get more out of his high school experience, and tries to get him to join a club. Yuki is quite the unwilling participant. He doesn’t even want to join the anime club. At the same time, Yuki is insanely good at activities that others struggle with. Yuta, on the other hand, is the responsible big brother, even if he is the big brother only by a few minutes. Slightly more active and engaging that Yuki, he takes care of members of the group and often pipes up as the voice of reason. Yuta goes with Yuki to get his manga fix, patiently waiting what could be hours before Yuki is satisfied. Yuta is also very concerned about having things clean and orderly, so he is also on the ball with the housecleaning.

Normally, things are cool between Yuki and Yuta, but there is nothing funnier that watching two stoics have a “fight.” This goes down when Yuta is busy cleaning the house and Yuki is being lazy. While he’s making excuses, he notices that Yuta is inadvertently dripping soapy water all over his manga. Oh SNAP! Yuki freaks out (well, does what stoics do, which is raise his voice slightly).  What starts out as the twins arguing over the wet manga escalates into them arguing over how they generally get on each other’s nerves. Yuki walks out, and Yuta is like, whatever. Yuki doesn’t go far: only to Kaname’s house, where he declares he’s moving in. Yuta calls Kaname to make sure Yuki didn’t get run over by a truck, but otherwise tells him that he can keep him.

I liked this episode because you really get to see the sibling dynamic between Yuki and Yuta. There is an adorable flashback to when the twins get bunk beds. This will be the first time they have not slept side-by-side since there were born. To add insult to injury, Yuki loses several rounds of rock-paper-scissors and ends up with the bottom bunk. Realizing the dramatic shift in their lives and Yuki’s anxiety, Yuta lets him sleep with him on the top bunk on the first night. You also get to see the dynamic when they make up as adults after the fight. While cleaning, Yuta is reminded that soon after getting the bunk beds, he accidentally breaks a dish. He is terrified of his parents finding out, and Yuki, for the first time, sees his older brother scared and shaking. Yuki decides that they should bury the broken pieces and disavow any  knowledge of the broken dish. Yuki tells Yuta that this makes him an accessory; they are now in it together. So cute! When Yuta remembers this, he realizes that maybe he was a little too hard on Yuki, and goes to Kaname’s house to collect him (much to Kaname’s relief). Yuki also realizes he was being a bit whiny, and allows himself to be collected.  All is well!

While Yuta and Yuki are siblings that are both stoics, the situation is a little different in My Teen Romantic Comedy SNAFU.  Hikigaya has spent most of his life ensuring that he will be a loner. Although he rationalizes his behavior as mature, he really just tries his best to put himself in circumstances where he does not have to interact with others and form relationships with people, since he has been rejected in the past. He has developed somewhat of a rough demeanor but his interior monologues reveal a certain amount of anxiety.

We get to see a different side of Hikigaya with the introduction of his little sister, Komachi. She is a typical anime girl: lively, bubbly, cheerful. Which makes you wonder if she and Hikigaya are really related. What I like is that while Hikigaya is angsty with the rest of the world, he is incredibly nice and caring to his sister. While he has a hard time talking to others, he is very comfortable talking to her. It’s mostly when he’s hanging out with her that you see that Hikigaya has a sense of humor and can laugh. In one episode when Hikigaya has messed up so much that it threatens the very existence of the service club, he goes to his little sister for advice.

At the same time, Komachi cares about her big brother. Clearly, she is used to his brusque attitude, and knows he has a hard time making friends. So when she finds out that Hikigaya is part of a service club with two female classmates, she does her part to make sure he doesn’t mess it up and keeps his friends. She orchestrates outings with Hikigaya and the service club members and then mysteriously disappears so that they have to hang out together. She sends Hikigaya on errands that puts him in places with his club members. She becomes friends with the girls and pressures Hikigaya to do things as a group for her sake.  He doesn’t say no, because it’s his little sister. Seeing Hikigaya be a cynic with the world but a concerned older brother is both entertaining and heartening.

The only thing better than stoics are sibling stoics!

Brothers and Sisters in Kimi To Boku [You and Me] and My Teen Romantic Comedy SNAFU by CeeFu is licensed under a Creative Commons Attribution-NonCommercial 4.0 International License.