Like many K-pop fans, many of my favorite groups are male (shout out to SS501, Shinhwa, Super Junior and SHINee!). Part of this may be because there are more male groups to choose from, but I have to admit that initially, the female groups like Girls’ Generation and Miss A didn’t do much for me. However, eventually I embraced the K-pop girl groups and here’s why.

As an omni-fan of K-pop, I listen to a lot of K-pop. I may spend more time viewing music shows, interviews and behind-the-scene shows that featured male groups, I listen to all manner of K-pop (thanks, iTunes shuffle option).  When I hear something I like, I just put it on my special K-pop playlist.  It shouldn’t surprise anyone that “Tell Me Your Wish (Genie)” by Girls’ Generation (SNSD), “Nu Abo” by f(x) or “Clap Your Hands” by 2NE1 ended up on the list. These are K-pop standards.  But putting my K-pop collection on shuffle also allows me to discover non-promotional songs by K-pop girl groups that I like, such as “Utja,” by SNSD and  “Beautiful Goodbye” by f(x).

It’s not my place to tell you what you should be listening to, but I do like to share what I’m listening to.  I like these songs!

K-pop fans are often energetic in their support for their favorite groups, and this is also the case for fans of K-pop girl groups. We’ve all seen fans of girl groups mobilize, like SNSD fans did for the YouTube Video Awards. They also maintain some amazing fansites, like YGLadies, which keeps fans up to date on 2NE1 activities and SNSD Korean, which features a helpful “Soshictionary.”  Fans of K-pop girl groups love their groups, and their enthusiasm for their groups is kinda infectious.  Fan projects like the 5th anniversary SNSD project by SONES in Italy shows their support:

While girl groups seem to rely on a certain number of concepts (you can always count on somebody going the cheerleader route at some point), they have more options when it comes to high-fashion. How many times can you put a guy in a suit? (Ok, a lot, and I fall for it every time).   I like pretty outfits, so fashion editorials like Miss A in The Star Magazine, SISTAR in High Cut and Girl’s Day in CeCi work for me: 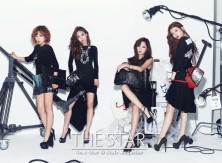 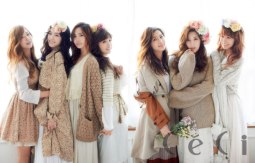 Now, I know what you are going to say. Girl groups promote stereotypes that focus too much on helpless femininity. They tell girls to be dependent on a man. They infantilize women. They define girls by a difficult-to-attain-and-maintain appearance.  Girl groups are created by male-dominated agencies to appeal to male desires.  To take on all of these is a whole ‘nother post, but in a quick drive-by, I would say: suggesting that women adhere to a standard that eliminates being girly by beating down on things like skirts or pink or tiaras can itself be a limiting discourse.  And somebody needs to explain the logic of a Korean agency creating girl groups for men when the fanbase is majority-female, because I’m not getting the cost-benefit analysis on that one.

Still, to a certain extent, some of these critiques are valid.  But I find that Rachel of Social Justice League does a great job of suggesting why we can still be a fan of “problematic things:”

After all, most texts have some problematic elements in them, because they’re produced by humans, who are well-known to be imperfect. But it can be surprisingly difficult to own up to the problematic things in the media you like, particularly when you feel strongly about it, as many fans do. We need to find a way to enjoy the media we like without hurting other people and marginalised groups.

That last part bears repeating in the context of K-pop girl groups, because while they might be problematic on some level, what is MORE problematic is the way some individuals advocate harm to the ladies in these groups or the praise given to those who do.   Because we might argue about whether putting skirts on members of girl groups contributes to a limited brand of femininity, but what actually causes harm is hateful discourse urging members to  “disappear” or name-calling younger members of fandoms because of their support.

Moreover, if you actually ask why individuals are fans of K-pop girl groups, you might be surprised at the answers. They are as likely to say they like girl groups because of their appearance as they are to say they like them because they work hard, or that they are goofy.  In other words, fans draw meanings about these girl groups in ways that may deviate from intention.  At this point, we all should know that many K-pop fans could care less what other people think about their support for their favorite K-pop groups.

Do what you want, be who you are. I’m a girl that likes K-pop girl groups because I like K-pop.

How I Learned To Stop Worrying and Love K-pop Girl Groups by CeeFu is licensed under a Creative Commons Attribution-NonCommercial 4.0 International License.