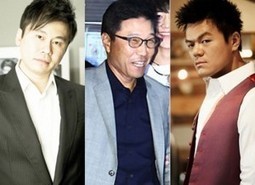 Holly Smith makes some good points about the significance of the Korean casting system to the success of K-pop,

However, some context is needed.  Boy groups and girl groups were not the invention of 1990s culture.  Often, individuals forget the large number of girl and boy groups of the 1960s, plucked from the “streets” and trained to be on television (when it was still fairly new).  There are parallels to be found between the Korean agency strategies and the strategies of a Berry Gordy at Motown. Deliberately crafting these public images occurs over the vast majority of popular music.