Originally published on KPK: Kpop Kollective on September 3, 2011 by CeeFu

When a Kdrama starts, I’m sure the writers have a clear idea of who the lead character is. Sometimes, that plan goes awry, as other characters become so compelling that they come in and steal the show.

In watching Warrior Baek Dong Soo, you expect the title character to be compelling enough to hold your attention.  You see how he has such a hard time coming into the world.  His father is executed as a traitor, and his mother dies soon after birth.  To add to his problems, he is born with birth defects that require that he wear bamboo braces.  Kinda hard to be cool in those. Nevertheless, he comes off as a plucky, determined hero.

However, Yeo Woon has an equally sad backstory.  The son of a righteous hero-turned-alcoholic who kills Woon’s mother,  he grows up to be a sullen young man, mostly due to his father’s assumptions about his “killer” nature.  When he finds out the truth about his other, he becomes an angry young man, and is mentored by the WRONG person, Chun.  As the final test of his training as a ninja (um, were there Chinese ninjas?), he is supposed to kill the closest person to him. Despite his father’s opinions, Woon is reluctant to kill his father (patricide is a no-no), and it is unclear whether he actually does the deed, or Chun does, or Woon’s father saves from having to do the deed.  As a result, Woon becomes a melancholy spy for the ninjas.

So, while I know I’m supposed to be intent on Dong Soo, I find myself more drawn to Yeo Woon.  Even though he doesn’t say much, he is more compelling than Dong Soo, who, after episode 10, has yet to make that turn from goofy to great hero.  He also at this stage is not much of a fighter.  He can hold his own, but he has yet to win in a fight against Woon, who is the better fighter. Woon’s character is deeper: not only may he be working for the man who killed his father, he is also friends with the guy he’s sent to spy on and, one would expect, will be ordered to assassinate at the right moment.  His ambivalence is palpable, and while he starts off as arrogant, he comes around to be a sympathetic character.  Oddly enough, I was not all that thrilled with Yoo Seung Ho, who plays Yeo Woon, as Chunchu in Queen Seondeok. Dude is a great actor! 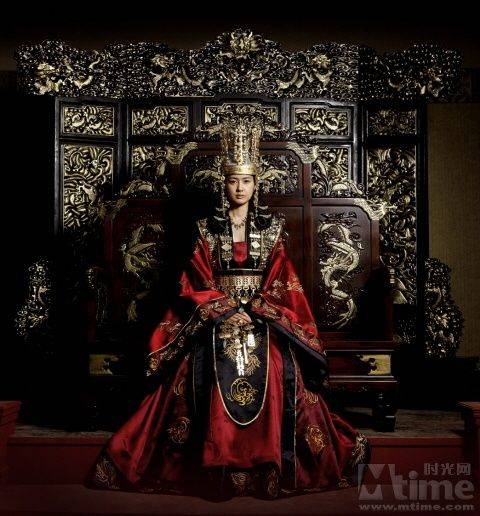 I’ve seen this kind of thing before in Queen Seondeok.  It’s called Queen Seondeok, so you do find yourself drawn to Deokman, her sad backstory of being hustled out of the palace, raised in the desert, only to return to the capital and join the elite young warriors, the Hwarang.  One thing that is great about her is that she’s clever, uses her mind to get out of situations, although most people don’t know it because she’s passing as a man.  She undergoes all of this, only to discover that she is not only royalty but daughter to a king.  Of course, by this time, everyone knows she’s a girl, and, apparently, is the one who will be able to regain the throne.  And yes, it does matter that she’s a girl, because she has to fight that fight to be the first female ruler of Silla.

What she doesn’t count on is having to tangle with Mishil, the royal consort.  That doesn’t even come close to describing how Mishil uses her feminine wiles to manipulate the men around her.  And rather than being a damsel in distress, she’s often the one dishing it out. I think the writers thought Mishil would be a minor character, but she practically takes over the Kdrama. She’s a villain, and she’s good.  Like eerily good. She knows her opponent’s plans because she has spies everywhere (they, on the other hand, seem to try really hard and get lucky with their plans).  She’s not afraid to back down, threatening everyone with that Mishil smile.  At the same time, you find out that she has motives that are kinda honorable? She’s complex, in a way that Seondeok fails to be.  Come for the Seondeok, stay for the Mishil.

I’m not mad at these developments.  I just think that it’s interesting how these things turn out.