Many people equate princess culture with Disney, but the princesses in wuxia popular culture defy those expectations. The Chinese drama Nirvana in Fire counters mainstream princess culture by drawing from the tradition of strong women in wuxia.

Critiques of “princess culture” abound, disparaging princesses for suggesting that girls trade their agency for appearance.  The book, The Power of Glamour: Longing and the Art of Visual Persuasion, puts it this way:  “The postfeminist mothers of princess-besotted little girls worry that the archetype teaches their daughters to be pretty and helpless, waiting for a prince to rescue them instead of acting on their own behalf” (Huffington Post).  Disney may produce these types of princesses the most, but the company is not alone.  Susan Scheftel connects princesses with the “cult of pink,” which she characterizes as “oppressive and devaluing, a kind of disempowering caricature of personhood.” In response, some have argued against the princess trope or advocated avoiding it altogether.

However, all princesses are not the same. The princesses that people rail against are often white and Western. Things work differently in Asian popular culture. It is interesting that when Peggy Orenstein seeks to provide counters to the traditional Western princess, her first two examples derive from East Asian culture:  films by Hiyao Miyazaki and Disney’s Mulan franchise.  Despite the stereotype of the submissive Asian woman, East Asian popular culture has promoted female heroes with agency who are not required to leave their femininity at the door. One such genre is wuxia. 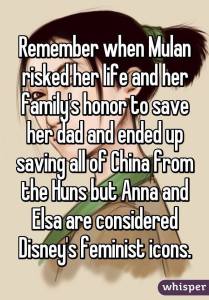 Wuxia has always been populated by women. One of the earliest wuxia films, Burning of the Red Lotus Temple (1928), featured an all-female cast.  Women are prominently featured in some of the biggest contemporary wuxia films, including Crouching Tiger, Hidden Dragon, House of the Flying Daggers and Hero. These women show that one can be pretty as well as effective. Women are central to wuxia films, and even more so in wuxia television series like Nirvana in Fire. The princesses in this series have their femininity heightened. They wear exquisite robes and elaborate hairstyles with stylish accessories. At the same time, they are smart and keenly aware of the larger social and historical dynamics around them. The Chinese drama leaves us with a wide variety of princesses, thus avoiding the pigeon-holing in Western princess culture.

Nirvana in Fire features warrior princess. Nihuang (Liu Tao), the female lead, is identified as a princess, but the first time we see her is in her battle armor showing her juniors that she’s the boss. We learn that she’s largely responsible for keeping the southern border in check, so we know she’s an effective soldier.  When she shows up in court, she sheds her gear for more appropriate dress for a princess (see opening image). When circumstances arise, she’s back in her armor, saving the day, which means saving the Emperor and basically the entire royal family.

Nirvana in Fire is a historical series that revolves around palace politics, so the majority of its princesses are not the warrior kind. Still, they reflect the same kind of complexity as their warrior sisters: femininity combined with cunning. You have women who have power.  The Empress (Zhen Yu Zhi) rules the inner court and oversees the consorts, but her real role is to use her position to help her adopted son, Prince Yu (Victor Huang), to become crown prince. The same is true of Evil Baddie #2, Consort Yue (Yang Yu Ting).  Consort Yue successfully orchestrated the rise of her son to become Crown Prince (Gao Xin), but now she has to keep him there. Let’s face it, he’s not ruler material. So, Consort Yue is constantly coming up with schemes to keep Prince Yu and his mother the Empress down. Contrary to the dynamics between women in traditional princess narratives, these women are motivated by ambition and clash over who can get the most power rather than jealousy over who is the prettiest. They use their sons as pawns to exercise influence.  When the Empress bullies the women in the inner court when she senses that they are getting too much attention from the Emperor.  When Consort Yue comes after another consort, it is because she sees her as a threat to her son as Crown Prince.

Consort Jing is at the other end of the spectrum. She is a low-level consort, but she is kind and she is equally smart. Prior to coming to the palace, she was a doctor. It is amazing to see how deftly she avoids the schemes of the Empress and Consort Yue. She possesses a quiet strength. Even though she tries to smooth the way for her own son, Prince Jing (Wang Kai), she never does so at the expense of others.

The historical nature and wuxia context of the series allows for a more complex representation of princesses in Nirvana in Fire. It does not ignore opinions prevalent at the time that devalue women.  Even thought Nihuang is a successful general, there are several palace personnel, including Consort Yue (a woman!), who argue that she should not be allowed to continue to run amok and do as she pleases and should get married. However, these stereotypical attitudes are countered by the behavior of other princesses and the respect they garner. Moreover, princess life has its downside. The Grand Princess was forced to marry someone she did not love by the Grand Empress Dowager using some unsavory means. For a good portion of the series, Consort Jing cannot see her own son except on certain days as dictated by the Emperor. Princess-ing ain’t easy.

The potential elitism of princesses is also disrupted by their friendship with women who are not princesses.  Nihuang’s best friend is Xia Dong (Zhang Ling Xin), who works in a law enforcement bureau. She is not royalty and she never dresses in fancy clothes, but Xia Dong  and Nihuang have each other’s backs.  When Xia Dong makes her annual pilgrimage to her husband’s grave, Nihuang sees her off, like she does every year. Xia Dong promises Mei Changsu (Hu Ge) to take care of Nihuang, despite her suspicions about him.

Friendship holds true even for older princesses.  The Grand Princess (Zhang Yan Yan) has a close relationship with Madam Zhuo (Liu Shu Chen), a member of a martial family who are not royalty.  Normally, these two should not be friends. Not only are they from different classes, they are from completely different worlds. The martial world, dominated by swordsmen with their own rules, are not considered classy and are relegated to the fringes of society. Yet, these women were close friends before, sharing a temple as they waited to give birth. However, due to unforeseen circumstances, one of the babies dies, and in the darkness and confusion, no one can tell who the surviving baby belongs to. These women decide to share: Xiao Jingrui (Cheng Hao Feng) becomes a man “with two surnames” and two sets of parents. So it is heartbreaking when the families fall out and the friendship between Grand Princess and Madam Zhuo is irrevocably broken.

Scheftel, Susan. “Princess Culture: What Is It All About?” Psychology Today. 24 Aug 2015. https://www.psychologytoday.com/blog/evolving-minds/201508/princess-culture-what-is-it-all-about.

In Wuxia, Princess is Not a Bad Word: Nirvana in Fire by CeeFu is licensed under a Creative Commons Attribution-NonCommercial 4.0 International License.