Ambivalence, romance and finance are anything but elements of a fairy tale in Cheongdamdong Alice (2012).  The Kdrama makes us think about non-romantic motives for relationships.

Cheongdamdong Alice (2012) follows the development of two characters.  On one hand, it tells the story of our “Alice,” Han Se Kyung (Moon Geun Young), a plucky, ever-optimistic fashion student who wants to be a designer.  Her economic circumstances prevent her from studying abroad, but she has made the best of her talents by working jobs and winning school awards. Se Kyung is soon hit with the realization that the fashion industry is clique-y, and after breaking up with her embezzling boyfriend, resolves to do whatever she has to in order to raise herself out of her dire straits and make it to Cheongdam.

Cheongdamdong Alice also tells the story of Cha Seung Jo (Park Shi Hoo), a man who responds to heartbreak by enacting a long-term plan for revenge-by-success, which also requires that he hardens his heart. That icy heart begins to thaw when he sees Se Kyung’s selfless acts on behalf of her shiftless boyfriend, and he begins to believe in love again, making Se Kyung the beneficiary of his new outlook life.

Ambivalence clouds the actions of both characters. We certainly don’t want Se Kyung to become like Seo Yoon Joo (So Yi Hyun), who literally wrote the book on golddigging. But the more misfortune she endures, the more likely she is to give in. While she manages to maintain her dignity and our allegiance for the most part, audiences must suffer with her when she opts not to tell Seung Jo about her plan to use him to get into Cheongdam society.  She never goes to the extent that Yoon Joo and Tommy Hong  (Kim Ji Suk) do, but viewers (and Seung Jo) have to reconcile Se Kyung’s sweet ways with her social-climbing desires. The ambivalence is not over whether or not she wanted to use Seung Jo. We, Se Kyung and Seung Jo constantly wonder where Se Kyung’s using stops and her actual emotions begin.

Se Kyung also redeems herself in other ways. She helps Seung Jo and his father to reconcile. That process also forces Seung Jo to face his own flaws, including his belief in his self-sufficiency and discounting of his father’s help.  Se Kyung does her share of heavy crying on the street, but she also delivers some of the best responses to those who try to smack her down. When Yoon Joo and Se Kyung get caught by Shin In Hwa (Kim Yoo Ri), Yoon Joo gets on her knees, acknowledging defeat.  Se Kyung, however, looks In Hwa in her eyes and dares her to do something.

While the Kdrama tells us to follow “Alice” down the rabbit hole, we get distracted by the silly rabbit that is Seung Jo.  Described by his intrepid friend Heo Dong Wook (Park Kwang Hyun) as having some kind of emotional disorder, Seung Jo is not the perfect, confident man he displays to the world. He swings from ridiculously giddy highs to heartbreaking melancholy lows.

Seung Jo provides ridiculous comic relief, but also has a more engaging personal journey.  While we cheer him on in his wooing of Se Kyung, we realize that he has his own unresolved issues. Seung Jo harbors unresolved feelings towards his father Cha Il Nam (Han Jin Hee) that impacts his relationships. Because he feels he was not loved by his father, he strives to maintain emotional distance from him. Seung Jo is that emotional male character in a Kdrama who pines after the love interest, but he also has to deal with his own faulty view of himself. He is overly concerned with having his actions validated, needs to hear “thank you” from Se Kyung, needs to be acknowledged.  While we may not like Yoon Joo for breaking his heart, she also gives him valuable insight into himself, trying to show him that relationships are not just about him and his feelings.

Here’s where the supporting characters really come into play, namely, Dong Wook. If this was a Greek play, he’d be the chorus, because he says what the audience would say.  He comforts and encourages Seung Jo when he’s trying to do the right thing. He also pushes him beyond his comfort zone and tells him when he’s being selfish and untrue.  Along with Secretary Moon (Choi Sung Joon) and Choi Ah Jung (Shin So Yool), he also participates in the matchmaking.

When Seung Jo and Se Kyung face and resolve the crisis of their relationship, we are left with the idea that they will be more upfront with their feelings and realistic about their circumstances. They seem to understand that romance is not a fairy tale because of real-world circumstances and the motives and desires of ordinary humans.  On the other hand, what do other characters learn? 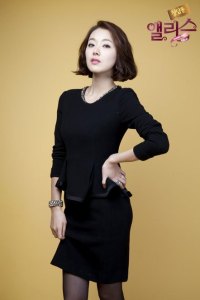 If ambivalence rules the dynamic between Se Kyung and Seung Jo, finance definitely guides the romance aspirations of Yoon Joo, Tommy Hong and In Hwa.   Yoon Joo faces her worst nightmare when her calculated entry into her upper-class family is discovered. Her evil sister-in-law, In Hwa, pounces on this opportunity to shame her and kick her out of the family. But we reserve our disapproval for the members of the family rather than Yoon Joo who fools them. Their entitled behavior and belief that they can use her to salvage a business deal makes Yoon Joo look like a girl scout. Shin Min Hyuk (Park Young Ji), Yoon Joo’s husband, goes from assuring her that he loves her to using her as his last pawn to partner with a rival fashion house.

We may be hating on Yoon Joo for the condescending way she treats Se Kyung, but she is infinitely better than these folks who chastise her for playing the game they created. They revert to the language of exclusion really easily: “How dare you try to enter OUR society,” “Those kind of people are not like US,” etc. Characters like Yoon Joo and Tommy Hong, who may be talented in their own right, are forced to use manipulative measures to gain access to that world, but are barred by those already in that class. Their actions, while questionable, are in response to the exclusion of the upper class. The Shin family and those like them become the ultimate villains in this Kdrama.

In fact, for all the talk of how finance is most important, these characters are ultimately guided by their emotions. Despite acting like a lean, mean, business machine, In Hwa gives in to jealousy, envy and revenge, working harder to bring Yoon Joo and Se Kyung down than on any ad campaign. While it may be a little stereotypical to say that “being a woman” means giving in to emotions to hurt other people, In Hwa shows that it’s not always all about the money.